Golf Greens Drainage “In the Dirt”

Last week XGD supervisor David Welsh recently completed the fifth green at Charles River Country Club “in the dirt”, so to speak. As the club was changing some of Donald Ross’s internal contours, they had stripped the sod of the green completely and safe guarded for reinstalling after the change in contours, XGD in the dirt, and a session of Drill’n’Fill to cap it off.

XGD has completed all this facility’s greens and approaches over the past few years and we couldn’t have been happier to be involved with the final installation at one of the Boston area’s finest golf clubs. Superintendent Paul Blanusa uses the XGD process as a major tool in his arsenal to help provide some firm and fast green area chipping and putting surfaces. We also never have forgotten that some of these playing surfaces are on some pretty shaley ground as the picture below illustrates some typical XGD trenching action at Charles River: 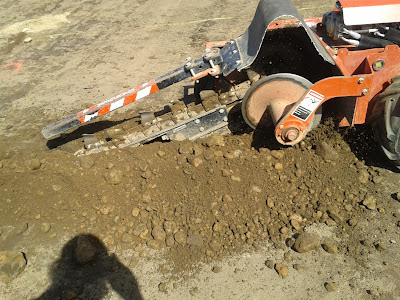 It is hard to believe that we can clean it up to look like the following picture below after the 9″ Drill’n’Fill procedure that Paul lined up perfectly as well to mesh with the multiple contractors all on site at the correct time, as the drilling operation was completed while XGD was finishing up with their green cavity drainage. 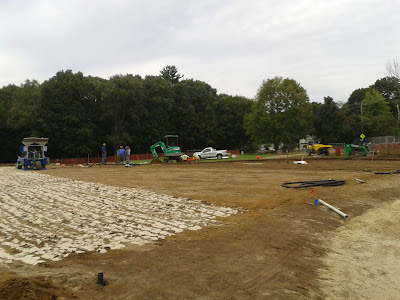 XGD Projects Manager Matt Magarian just began at Kenosha Country Club in WI, just north of Chicago on another Ross gem that they are restoring to original glory. While Keith Kirsch is in Chicago as well at St. Charles CC, and David has returned to Cape Cod to complete another XGD green “in the dirt”, while firstly stripping sod, XGD, prepping/laying new greens sod at “Pebble Beach of the east coast, New Seabury CC.

So reach out to us at XGD Systems for your next regrassing/drainage project you may want to undertake at your facility, and we can get you some budget numbers to pull of a complete, seamless restoration in a sympathetic manner to your club’s original course architect.