NCR Country Club, XGD and Major Golf Championships We Have in Common

Keith Kirsch and Cristobal Gayosso have been leading our installation crew here at this historic golf venue in Kettering, OH near Dayton. This is the second of four phases to complete all greens on their championship course.The following picture illustrates the mainline installation and the laterals angled in our usual way to capture as much gravitational groundwater as possible: 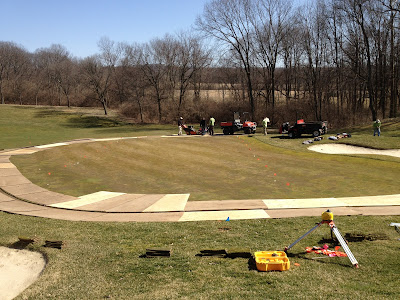 NCR Country Club was designed by Dick Wilson and opened in 1954. The club has a long history of hosting major golfing championships including the 1969 PGA Championship, the 1986 US Women’s Open, and the 2005 US Senior Open. Upcoming for NCR is the 2013 USGA Women’s State Team Championship.
While on the subject of 2013 Major Golf Championships, it is a huge year for us at XGD Systems as well, as the 2013 US Open at Merion GC, and the 2013 PGA Championship at Oak Hill CC. Both of these majors will be played on  greens outfitted with our XGD System, so it would be an understatement to acknowledge how excited we are here at greens drainage headquarters.
But I digress back to NCR and the opportunity they are presenting us with in the here and the now. These last two pictures illustrate the same green in a nearly finished state, and the last in a completed state as well: 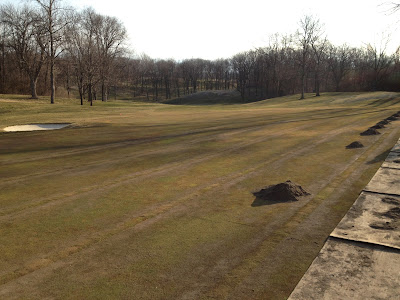 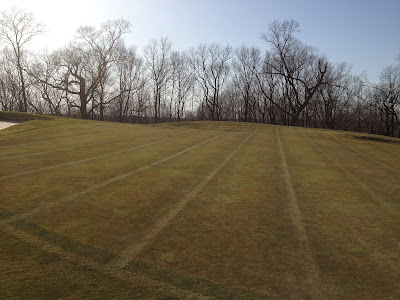 Once this crew is finished here, we have just been informed they are moving across the street to complete an initial green at Moraine Country Club, a classic old club as well right in XGD’s wheelhouse.
Once Keith and Cristobal are complete next week in southern OH, they are moving on over to Chicagoland to complete several projects which were left over from our busy 2011, as well as begin on some new and exciting recently secured installations.
I will begin blogging next week on some of our east coast projects which got underway this week as well in NJ and Long Island, NY.
Over and Out, Poor Old Dirt & Grass Farmer
Recent Posts
Recent Posts
Need Some Work Done?
Contact us today to start the conversation!