XGD Supervisor David Welsh and crew are just putting the finishing the touches on a three green install at this #28th ranked Classic course in Edison,NJ. After the rain shortened Barclays PGA event from 2011 held here at Plainfield Country Club the club decided to move forward with their greens drainage program and enlist XGD Systems to help them lower their gravitational groundwater table, so as to create some more pore space in the upper soil profile so that they are more prepared for the next heavy precipitation event.

The picture below exhibits a fantastic subsurface drainage layout by David Welsh and Agustin Santiago which really captures the gravitational groundwater and some surface water before it begins cascading across the severe slope on Plainfield’s ninth green: 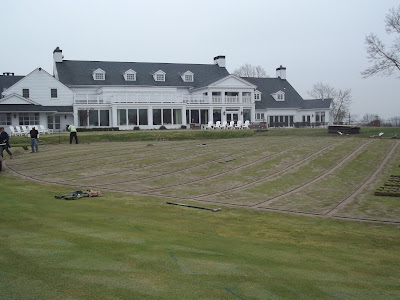 It would have been easier to orientate these laterals directly with the grade offered up by original architect Donald Ross, and point them more towards the center of the clubhouse, but instead David and Agustin had the capture of groundwater as the most important design element on their minds, and both surface and groundwater can be captured and removed before it can begin flowing across the berm at Plainfield.

In modern sand green construction the layout and direction of drainage laterals in the peastone filled subgrade is ultimately inconsequential. However, at XGD Systems we feel it can make or break a successful installation for us, and routinely does as we are finding several clients are moving on from other contractors and hiring us to complete their greens drainage and regrassing programs.
Regrassing of greens and our ever popular fairway drainage services, are perfect compliments to the thousands of greens drainage installations we have been performing across North America over the last 20 years.

So reach out to us directly if you may need some budget numbers on our vast array of services offered, and stop by to see an installation that might be occurring at another club near you.