After catching up with Richter Park GC superintendent Robert Dorsch at the New England Regional Turf Show last week in Rhode Island, he was kind enough to fire me off a few pictures of our internal subsurface greens drainage installation at his course. Richter Park Golf Course is located in Danbury,CT and is a picturesque public course located on a reservoir with water coming in to play on 14 of the 18 holes. The course was designed by Edward C. Ryder and opened for play in 1971.

The club had experienced some winter damage in the winter of 2011, and was looking for ways to enhance the turf health on several of their problem greens. While XGD is not a panacea for winter damage there are several ways our process can put your greens in good stead for whatever Mother Nature may toss your way:

ii) when the ground freezes(or this winter, if the ground will ever freeze) some strategically placed cup cutter holes over top of our XGD laterals can aid in surface water removal even if the top few inches is frozen, and taken to the next level XGD can leave you some risers in these areas as well

iii)when the ground thaw does occur in the we find an XGD greens soil temperature will warm up about 2 weeks faster than a non XGD green on your course – this is due to the fact that we have removed the useless gravitational groundwater from your greens subsoil which keeps the soil temps very cool, conversely in the heat of the summer XGD provides the opposite effect by removing the steamy, hot groundwater and providing a temperature cooling effect by doing so.

We arrived at Richter Park just before the Halloween snowstorm of last fall and the picture below illustrates some of the challenges we faced after the storm ceased in order to get back to work as quickly as possible. Also, a big thank you to Rob Dorsch and his staff for helping us do so, and helping us getting around the course as well. 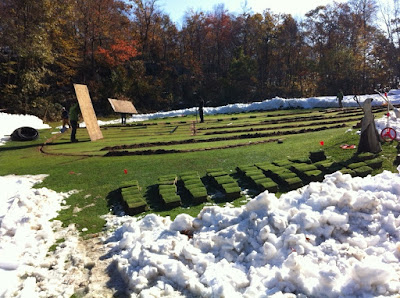 Take a close look at the back of this green and you can see the snow was piled up over 4′ high in some spots.We also had a crew over at Hartford GC at the same time who faced some of the same challenges we did on this site, which mostly included getting around the courses with not just the snow issue but all the trees and branches that had fallen under the weight of the white stuff.
Finally, Rob sent me this picture of some happy golfers just minutes after we had completed the green, and as advertised open for play immediately: 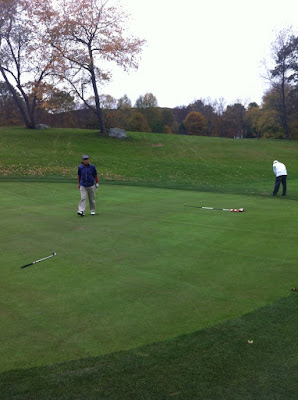 We lost several days of production on these CT projects, but it was a testament to both our staff and the courses staff that helped minimize our downtime and get us back out their working as soon as it was safe to do so.