Back in early March, Keith Kirsch and crew arrived on site at the historic Ruth Lake Country Club in Hinsdale, IL. Their website mentions a who’s who of early era famous midwest based golf architects, as it refers to another well known Foulis brother(David), whom possibly laid out the routing firstly, before William Langford and Theodore J. Moreau put their finishing touches on this sleeper of a layout.

In 2005 the course was modernized by Arthur Hills/Steve Forrest and Assoc. and during that restoration half of the greens were rebuilt to USGA specs while the original pushups were regrassed to a modern stand of bentgrass which superintendent Dan Marco takes very seriously, in terms of keeping that grass strand pure and free of poa annua, as you can observe from the picture below: 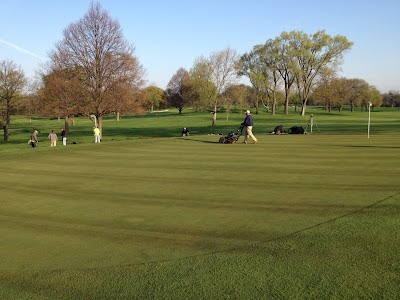 Now that is a nice stand of bentgrass, seven years after the regrassing operation it still looks fresh and pure. The XGD staff just finished their internal greens drainage operation, and handed over the putting surface to the greens staff for rolling firstly, and then mowing as shown above. While in the background we are installing the greens drainage outlet pipe.

We completed just an initial two greens during this mobilization, while Ruth Lake CC will monitor the greens infrastructure improvement over the playing season, and possibly revisit whether they will complete their other seven pushup greens at a later date. A fairly typical, analytical way in which clubs choose to spend their capital improvement dollars, and in our eyes here at XGD, money spent on your precious original greenpads is akin to providing a proper foundation that will last  least at least 20 years in to the future.