Just back in September XGD Operations Manager Matt Magarian completed some greens at Waterville Country Club, ME in central ME, which is about 3 hours north of Boston. Waterville CC is a somewhat typical New England facility in that it has some ties to Donald Ross, as his construction supervisor Orin Smith had a hand in the design of the original nine holes. Orin Smith also worked with Willie Park as well, so the club had some early era designs on its nine holes to hang its hat on.

In the mid 60’s, Geoffrey Cornish was hired to add nine new holes and renovate the original none holes. Today, you see a finely manicured and well bunkered facility with large, proud greens seen from its early era of golf architecture. The only thing missing from this facility might be some internal greens drainage to help firm up those original pushup greenpads, which would aid in bringing the greens up to modern golf standards.

So, we were contacted by GCS Chris Warren, and after a visit to Waterville, an installation date was setup in mid September. Recently, Chris sent us this great short video on some gravitational groundwater exiting the soil profile on one of his greenpads:

That is great to view some positive feedback so quickly after an XGD install. As the greens soil profile gets more mature, it will just start performing better as more time passes, as the soil learns how to release that useless gravitational groundwater once saturation point is reached.

We just wanted to thank Chris Warren, and Waterville CC and their confidence in our process, and we couldn’t be more thrilled with the results, and we look forward to a long term business relationship with this facility.

Waterville CC is one of many happy customers, and is a great example of how XGD Systems gets a chance to show our wares. So, give us a shout at greens drainage headquarters to see if we might be able to as in bring your facility to the next level. 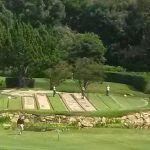 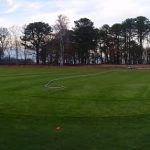