XGD supervisor David Welsh has been on site here at New Seabury Country Club in Mashpee, MA on Cape Cod’s southern shore for the past two weeks installing our 2″ XGD fairway drainage for the first two weeks of the project.
During the latter half of last week we have been undertaking a minor bunker restoration here as well. Scope of work including sand removal, 2″ XGD bunker drainage install on 6′ spacing with bunker sand backfill, and then a freshen up with new bunker sand. 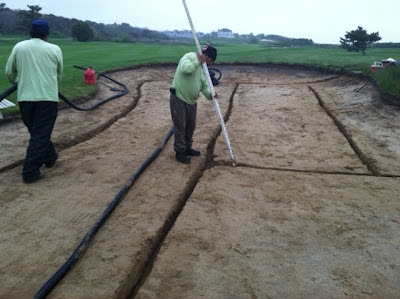 This bunker drainage alternative eliminates the need for traditional 4″ drains and the soil water interface created when the soil water has to build up enough surface tension to break through in to the peastone interface, and then do the same to enter the pipe. With XGD all the particle sizes are uniform, and the “wet bunker sand” phenomenon is eliminated.
TDIGolf recently completed a major restoration at Lambton G&CC with Rees Jones and drained all the bunkers in this fashion to rave reviews.

The picture below illustrates the XGD trenches backfilled with fresh bunker sand and are ready for 4″ of the same material to complete the process: 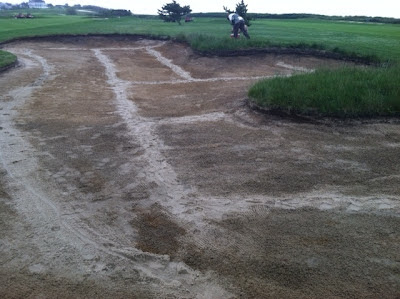 Any type of drainage is generally a simple process that has been complicated over the past few decades by those trying to make a distinct name for themselves, and in doing so adding unnecessary layers that act as an impediment to soil water flow, and not an aid.
For more of our simplistic, yet effective views on this old topic check out this article I recently completed for the Golf Course Trades magazine.